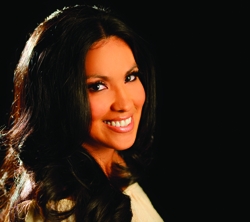 As a little girl, Lisbeth had enjoyed dancing while her father earned his living singing and playing the guitar at parties. Yet when this humble family in Central America discovered the message of salvation through faith in Christ, Lisbeth gave up secular ballads to sing Christian hymns with her dad.  She was only nine years old when she decided that she wanted to be baptized.    After her High School graduation, Lisbeth joined a quartet called Manantial, and in 1996 she released her first solo album, titled Cuan Grande es El (How Great Thou Art). The same year Lisbeth sang for a government event in her country. It was during this event that Lisbeth caught the eye of a high-ranking army general. He recognized her potential and offered to sponsor her music career, but she declined because she knew God did not want her to sing secular music.    The following year she enrolled in Central American Adventist University (UNADECA) located in Costa Rica. Her dream had always been to have a Christian education, and through the help of a generous donor in the U.S., that dream was becoming a reality. While studying World History at UNADECA, she continued to witness to others through her songs. "My music professor, Professor Andrean, really inspired me to sing. He saw how I wanted to enter the music ministry, and he gave me opportunities to sing when others might have given up on me."

Lisbeth recorded her second album, Mi Salvador (My Savior), in 1998.    Lisbeth graduated with a Bachelor's in Education, and during her senior year, she met an American missionary. They fell in love, and two years later they were married and settled in the U.S.  Since then she has had the opportunity to travel as a missionary and as an interpreter for Detroit Maranatha Mission Group in Mexico, Peru, El Salvador, Ecuador, and Chile. Whenever she wasn't busy translating for the Maranatha volunteers, Lisbeth sang and worshiped with the many congregations she encountered. "I was particularly touched by those people who told me that my songs inspired them to be baptized. I really think that the Holy Spirit was working on those people's hearts through my music."

In 2008 Lisbeth released her first album on compact disc, Crecí Escuchandolos (“I Grew Up Listening to Them”), recording several songs with Pastor Louis Torres, the former bass player of Bill Haley and the Comets.  Since that time, she has appeared frequently on 3ABN, has been invited to sing in Spain, Mexico, and Colombia, and has had the honor of performing special music in programs hosted by such diverse talents as Robert Costa of Está Escrito (It Is Written), David Asscherick of Discover Prophecy, and in evangelistic campaigns led by Pastor Alejandro Bullón.

Lisbeth currently resides with her husband and their beautiful daughters in the United States in Nashville, Tennessee.